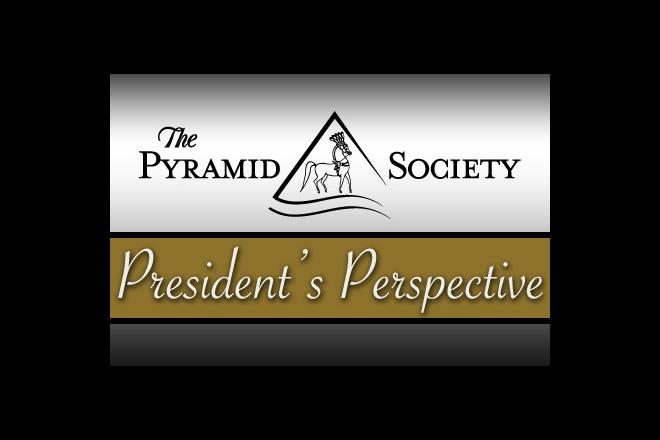 In my ongoing goal of keeping you apprised of the day-to-day activities of The Pyramid Society, I'll begin by saying this month's message comes with mixed emotions. And in my life-long tradition, when given the option, I'll continue my habit of sharing the bad news first. It is with sincere regret that I inform you of Bridgette Orwig's resignation as Egyptian Event Show Chair and also from the Board of Directors, effective August 31st.

Bridgette began serving in 2008 and soon afterward assumed the role of Show Chair. No one knows the countless hours involved in wearing this hat, but Bridgette wore it proudly and effectively, and both our Event and our organization are stronger because of Bridgette's service. We will genuinely miss her insight, her tremendous skill set, as well as that great British sense-of-humor! On behalf of the entire Board of Directors, Trustees, and members, I wish to take this opportunity to again say, "Thank you, Bridgette, for a job well done."

I am, on the other hand, pleased to report that Joe Polo has agreed to serve as our Show Chair, beginning with the 2014 Egyptian Event. Joe's varied background as a businessman, long-time trainer, horse show manager, and judge, should serve us well in this capacity.

The other good news I wish to share is that our Event was financially successful this year, thanks to your dedication and participation. However, as you know, our numbers were down this year, primarily due to fewer futurity nominations at the height of the recession, and, no doubt, impacted by today's overall weak economic climate.

As an organization, it is critical that we continually review and critique every decision in our two-pronged goal of strengthening both The Society's financial footing and subsequently, its ability to serve. And the Board and Committee Chairs will begin this process again at our August Board Meeting. Every aspect of the Event will be discussed and evaluated with the above-stated goals in mind. Be assured, however, that remaining as the centerpiece will be the overarching and collective goal of retaining that Event spirit that sets our show apart and makes it unlike any other. And, as promised earlier, I will share with you relevant Board decisions as they are made.

Again, thank all of you for your feedback, your support and continued dedication. It is a pleasure to serve as your President.