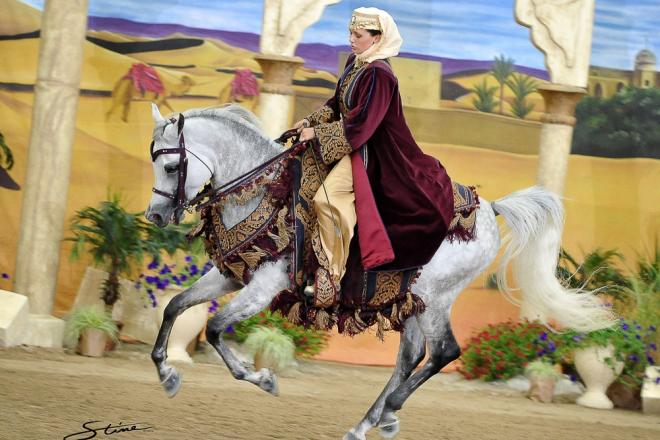 Wednesday, August 15, 2012 - 7:17am
Dara Meadows Farm - Lexington, VA
VA
United States
Extra, extra! We have some exciting news to share from Pyramid Society member Debra Geiser of Dara Meadows Farm and Don Stine, official 2012 Egyptian Event photographer. The photo pictured here, taken by Stine at the 2012 Egyptian Event and featuring the Straight Egyptian stallion Jadoube Ibn Lahab DMF (Al Lahab x HMT Sylvanna) with rider Amy Spiker, has been selected by artist Mike Mandel to be a part of a mosaic tile, multi-breed collage wall he is producing during an expansion/renovation of the Will Rogers Coliseum in Fort Worth, Texas!

Jadoube Ibn Lahab DMF was the Native Costume Champion at this year's Event, only adding to the overall prestige of this selection. "We are very proud to have Jadoube selected to represent the Arabian horse at such an important horse venue," says Debra Geiser, the owner of the stallion, "Our hope is that he will stand out in the collage and attract people to our beautiful and loving breed."

Don Stine is doubly happy about the occasion, saying, "I am excited Mike selected one of my photos to represent the Arabian horse breed - thanks to you!" Stine has worked with The Pyramid Society to capture The Egyptian Event for the many years, and counts The Event as one of his favorite shows throughout the year. "The show has always been close to my heart," states Don, "and I think what makes this so special for me is that the horse was a Straight Egyptian... he was beautiful - and he moved as good as any performance champion I've ever shot."

Likewise, Debra lavishes her praise on Jadoube, "He combines so much all in one horse. He has exotic type, size, correctness, superb motion and a beautiful mind... we consistently hear from anyone who spends any time with him that he has the kindest disposition they have ever seen. His Native Costume championship at the Event was his first time to show in that class, and he performed like a dependable old pro!"

Congratulations to Don, Debra, Amy, and Jadoube for invoking this exceptional, high-profile promotion of the Straight Egyptian horse. The Egyptian Arabian community should be quite proud!

Mike Mandel's art has been featured in public works projects across the United States, including the Continental Center in New York, the San Francisco, San Diego, and Tampa Airports, the Knoxville Convention Center, and the Charlotte Arena. What's more, the Will Rogers Memorial Center in Fort Worth is home to some of the world's largest equestrian events, including the annual Reichert Celebration. 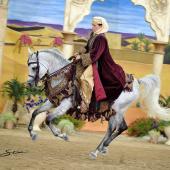 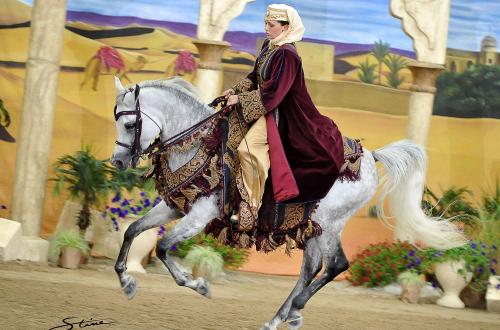