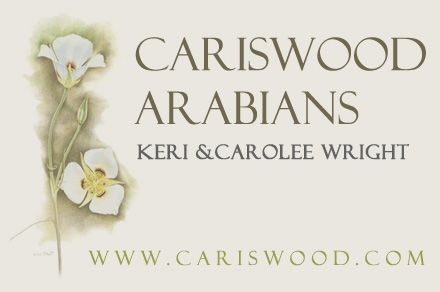 Some of Keri’s earliest recollections place him in the saddle with his mother on her mare named Saudi.  With his father riding the more spirited Rock-N-Roll they would go for rides along the old stage coach trails of the Wasatch Range of the Rocky Mountains just south of the city of Ogden, Utah.

In later years, though not an avid reader, night time would frequently find him with one of Walter Farley’s Black Stallion series or perhaps the fictional biography of the Godolphin Arabian as brought to life by the celebrated author, Marguerite Henry.  Just 11 years old, he attended the now famous Gleannloch Sale of Champions on May 18, 1968 which officially marked the family’s entry into the Arabian horse business.  The family owned, bred and showed many Arabians over the course of the next several decades, including their herd sire, Mohssen (*Ansata Ibn Halima x *Bint Mona), a champion stallion and Canadian National Top Ten stallion in 1972 as well as several well-known mares: *Bint Nefisaa, *Hekmat, *Salomy, *Omayma, *Sammara, Nourah and many others.  Circumstances arose that would take Keri and his family away from the farm and from the horses for a time, but those formative years left an indelible impression upon his heart that would eventually bring him full circle.  He and his wife, Carolee, now have a very small breeding operation located in Sandy, Utah, about 20 miles south of Salt Lake City.  In addition to their involvement with the horses, they are the parents of five children: Ethnie (married Hunter Gundersen), Valree (married Jared Dowland), Jessica (married Bryce Smith), Cort (attending college at BYU) and Kristianna (also attending college at BYU).  They also have 4 grandchildren: Emilie & Jimmy (Valree & Jared’s daughter and son), William (Ethnie and Hunter’s son) and Paige (Jessica & Bryce’s little girl).

Carolee’s upbringing did not include any involvement with horses, but it was through the horses that she and Keri met.  She was raised in the city and because of her father’s position with the old Mountain Bell (now Qwest Corporation), they moved frequently during her childhood:  from Utah to Colorado to Idaho and then back to Utah where she attended Brigham Young University.  Keri and his younger sister, Melanie, had shown horses with another Utah native, Judy Bonham.  Melanie and Judy ended up rooming together at college and maintained their friendship over the years.  Judy later married Carolee’s brother, Reed.  Melanie and Judy decided it would be a good idea if Keri & Carolee met.  They were later introduced and the rest, as they say, is history.  Carolee’s love for the horses was an acquired thing, more through watching the impact they had had in her husband’s life, and perhaps especially how some of the children took to them so naturally.  She loves to learn and has studied a great deal to become more acquainted with them over the years.  Her passion lies with natural healing.  She is currently studying to become an herbologist and looks forward to being able to make application with the equine members of our family just like she has so successfully done over the years with her children and husband.